Studying religion and philosophy at St Paul’s is about giving students the chance to look outside themselves. To look beyond Brook Green to the cremation pyres on the banks of the River Ganges, the prayer flags fluttering across the hills of Tibet and the black Kabbah in the heart of Mecca. To look at the women standing at the foot of the cross or facing martyrdom in the arena. To look beyond questions such as ‘How long should my essay be?’ to ‘Is there such a thing as “right”?’ and ‘Does God exist?’ And to look beyond the hymns we sing in assembly to the story of Christianity in the West and the doctrine that lies behind those hymns.

We draw on the students’ natural enthusiasm for new ideas. We don’t give them answers; we give them information, raise questions and encourage them to draw their own conclusions. We introduce them to great works of religious art, music and literature and take them to see different examples of religious architecture. They meet sacred texts and people of faith: history, myths and stories that have inspired peoples through history. We look at the impact of religion on history and culture around the world.

We ask them to reflect, to recognise their own fundamental outlooks and be challenged by the ideas of their peers. We give them the conceptual tools to think about ethical issues such as abortion and euthanasia and the philosophical tools to be able to analyse arguments, whether these are concerned with arguments for the existence of God or the relationship between science and religion. They will encounter philosophical problems from Plato’s Cave to Philippa Foot’s trolley problem and John Searle’s Chinese Room experiment. They will meet the ideas of Augustine and Aquinas as well as those of Wittgenstein and Kant. In a world where the understanding of religion seems increasingly important, not less, we respect faith but are not afraid of questions.

The religion and philosophy department offers the Edexcel International GCSE in religious studies to those in the V and VI. This course covers two topic areas – ‘Beliefs and Values’ and ‘Religious Community’.  ‘Beliefs and Values’ includes beliefs about destiny, the nature of reality and the ethics of relationships, rights and responsibilities.  The ‘Religious Community’ element of the course is a study of Islam, including its texts, leaders, ethics and rituals.  To those in the Senior School, we offer the the AQA A Level in Philosophy. This comprises two papers: Epistemology and Ethics, and Metaphysics of God and Metaphysics of Mind. 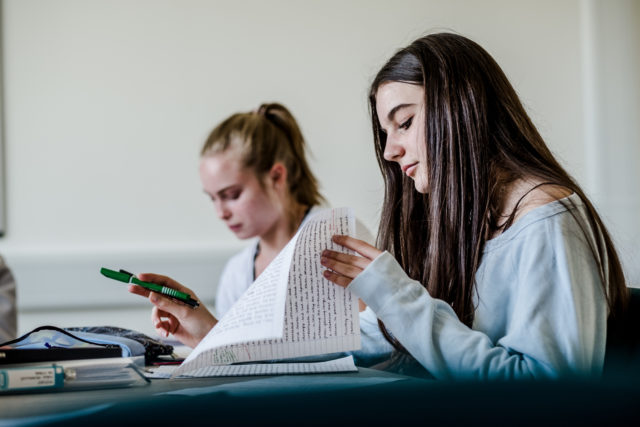